Biryani has always been the most cherished dish amongst the food lovers. Whether it’s Mutton Biryani, Chicken Biryani or Veg Biryani, this mouthwatering dish can never disappoint the people around the globe. Though cooking Biryani may look like a daunting task but once the recipe is followed it can be made without a hitch.

How to make Boneless Chicken Biryani

Boneless Chicken Biryani is going to be a little different from the regular Chicken Biryani, as boneless chicken becomes tender pretty fast compared to chicken with bones.

Rice is the most important ingredient of Boneless Chicken Biryani recipe. Choosing the right rice is imperative to make biryani as the wrong choice will make the rice mushed up and the biryani will lose its taste. Long grained Basmati is the right choice of rice in making Boneless Chicken Biryani. The aged Basmati rice adds the flavor and aroma in the special boneless chicken biryani recipe.

Here is the list of ingredients that will be used in boiling the rice.

Soak rice in enough water for at least half an hour. Wash it, and now transfer the rice in a deep pot, add at least 12 cups of water OR enough to boil them partially and put the above mentioned ingredients in it. Boil the rice to partially cooked (3/4th cooked) and now drain the excess water. At this point remove and discard the bay leaf, cloves and garlic cloves and also ginger. They were added to enhance the flavor and aroma to the rice. The aromatic Indian spices are perfect as a flavor enhancers to any dish.

Step 1 – In a pot, heat 1 cup oil, add finely chopped onions in it. Keep stirring them continuously so that it doesn’t get burnt.

Step 2 – Once they are fried in a beautiful brown color, take them out. In the same oil add the boneless chicken pieces. Fry them for a minute and now add ginger garlic paste. Keep stirring them on a high flame.

Step 3 – The chicken pieces will turn light brown, add the chopped tomatoes and whole green chilies. Cover the lid, so that the tomatoes are fully tender. Keep on stirring it so it doesn’t get burnt.

Step 4 – In a bowl whisk the yogurt. Now add yogurt and Lucky Chicken Biryani Masala in it. Mix it well and lower the flame to medium low. Cover the lid and let it cook for another 20 minutes. Keep an eye on it, if needed add very little water in it and keep stirring it.

Step 5 – Once the gravy of boneless chicken is ready. It’s time to layer it with the rice. In an open wide pan put the layer of half of the boiled rice. Add the boneless chicken gravy over it, add the fried onions over the gravy and also sprinkle the fresh chopped coriander leaves. Now layer it with the remaining boiled rice. On top layer sprinkle the saffron infused milk. Heat Ghee in a small frypan and now drizzle it over the rice.

Step 6 – Cover the lid and put the vessel on low flames for at least 20 minutes. This is called giving the famous “Dum” to the Biryani.

The special Boneless Chicken Biryani is ready to be served!!

“Dum” can be given in oven also. Layering of the chicken gravy and rice will be done in a tray. Take an oven proof dish. Layer half of the boiled rice. Now add the boneless chicken gravy, fried onions and fresh chopped coriander leaves on it. Add the remaining rice and also sprinkle the biryani with saffron infused milk. Heat ghee in a small pan and put it over the biryani. Now cover the tray with aluminum foil. It is ready to go in the oven.

Pre-heat oven at 250 degrees F. put the tray in the oven for 20 minutes. Now reduce the oven temperature to 200 degrees F, and let the boneless chicken biryani cook for another 20-25 minutes.

Boneless chicken Biryani is a treat for everyone. Especially for those people who like to eat chicken biryani but don’t like bones in it. It’s easy to make and the preparation and cooking takes half the time of the regular chicken biryani. Now that you have the recipe at your hands, don’t shy away from trying it. A sumptuous treat for the food lovers!! 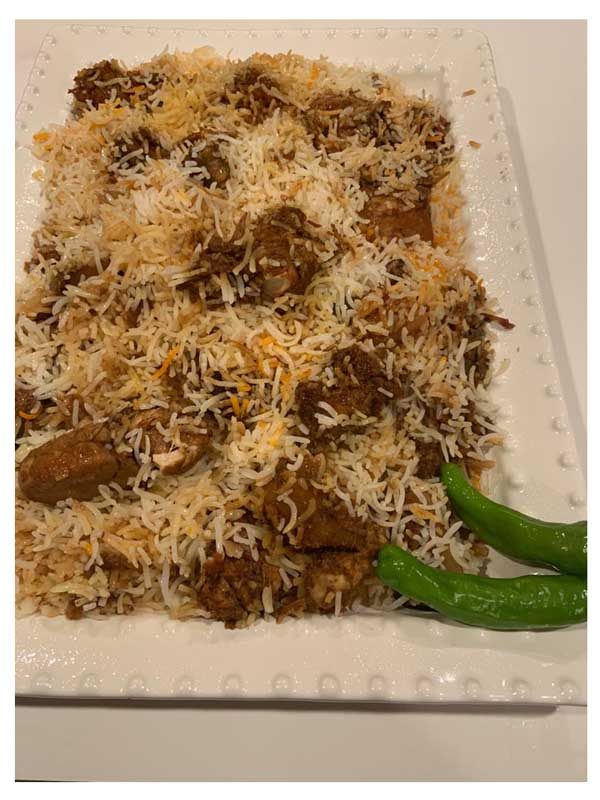