Paya is one of the most adored dish amongst the non-vegetarians. The slow cooked goat trotters in a caldron gives the most exotic flavor and the aroma. Non vegetarian menu cards are incomplete without the mention of this super rich traditional dish. Paya Masala is cherished by the food lovers all over the Indian subcontinent. Goat trotters are known as “Paya” in Urdu. The dish was very popular in Central Asia and was known as “Pacha”. Paya Masala was introduced in India by Persians and was finally concocted by the Muslim cooks of Hyderabad and Lucknow, according to their own regional taste. Therefore, Paya Masala recipe will undergo several regional changes from one part of the country to another. But one thing will remain unchanged and that is the delicious flavor and mesmerizing aroma of this delicacy.

In Northern Indian states Paya Masala is slow cooked in a caldron for 6-7 hours and is served during the early hours of the morning as breakfast. Nihari and Paya Masala are served with naan and Kulcha paratha (Indian bread). The combination is very famous breakfast in the northern part of the country. 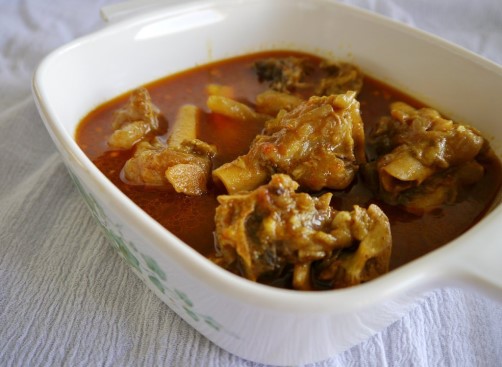 Goat Paya is fairly easy to make, once you know the ingredients needed for it. For some people making the mutton/goat Paya seems a pretty difficult task as it involves a lot of time. But the time which is consumed in making Paya traditional way can be cut by the use of pressure cooker. Pressure cooker is a smart alternative for those who are tight on time but doesn’t want to compromise on the deliciousness. Here is the complete list of ingredients needed to make delicious Paya Masala:-

Nowadays goat trotters can be bought already cleaned and in ready to cook state by the butcher shop. In the western countries, goat trotters are so clean that only thing that needs to be done before cooking them, is just to wash them once in the running water. Normally the butcher makes sure to clean the trotters by burning them on open fire, to get rid of hairs and veins. But if at all one sees any burned hairs or skin on the trotters they can easily be scraped out by the knife.

Once the Paya (trotters) are clean the next step comes to cook them so it becomes tender. Tender to the point that the bones will also melt once you touch it. There are two ways of doing it. One is the old traditional way, where Payas are cooked with water and whole spices in a caldron. This is the longer process as the trotters will be slow cooked for at least 4-6 hours. (6hrs in case of lamb trotters). The other step is to use the pressure cooked and cut short the cooking time of mutton Paya Masala. Pressure cooker will tenderize the trotters in half an hour. Here the flames will be turned on to medium low to build up the pressure, and with regular whistles the trotters are soft and tender in not more than half an hour.

Both the ways of preparing trotters have their own fan following. Some wants to go the traditional way and for some the modern use of pressure cooker is preferred. No matter what way you choose for cooking the goat payas, one thing is sure that this delicious dish will not disappoint you.

Recipe for Paya Masala – A step by step guide

Here are the main steps that are needed to make the goat Paya Masala:

Lucky Paya Masala is a perfect harmony of finest Indian spices to give the choicest flavor to the Paya. The perfect ratio of the spices used in Lucky Paya Masala makes sure that you cannot go wrong while making this delectable dish.

These are some tricks and tips which are handed down from generation to generation to make the mutton Paya more delicious and easier.