Your friends are coming over, and you want to impact them, but what would you prepare for their meal? The best option is to make the Sindhi biryani because everyone loves sizzling, tender, and spicy Sindhi biryani.

You might be thinking of searching for the Sindhi biryani recipe, but before you go out on Google, we got you covered with Lucky Masale’s instant recipe, which is very delicious. 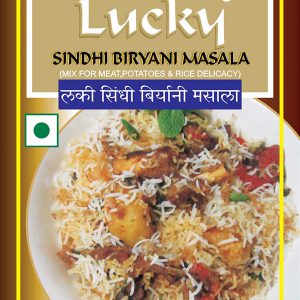 If you don’t know the tips and tricks of making the Sindhi biryani, you won’t be able to make the best for your friends. It is tough to enhance the flavors of the subcontinent dishes, and without the flavors, these dishes are not delicious.

So, here are some of the professional tips by Lucky Masale to give your recipe a touch of professionals:

If you want to make the Sindhi biryani delicious and mouth-watering, we recommend using the Lucky Sindhi biryani masala instead of other local spices.

How to choose the rice and marinate Chicken or Mutton?

When making the Sindhi Biryani choosing the suitable rice is very important for you because the rice would give it a perfect look. If you marinate the Chicken or mutton, whatever you are using correctly, you will be able to get the right juicy meat in your Biryani that will taste delicious.

The only reason the Sindhi biryani is famous is its taste and flavors. The region of Sindh is renowned for its foods, and many people in the world love the biryani even if they are not from the subcontinent.

If you live abroad and your friends want to taste Indian dishes, you can make the Sindhi biryani with the Lucky masalas Sindhi biryani recipe, and I am sure they would love it.

One thing that makes Sindhi biryani masala recipe different from others is the combination of meat with Potato. The tendered and spicy beef with boiled Potato tastes simply mouth-watering.

Now the mouth-watering biryani is ready; it is the time to garnish it, so it tastes awesome and looks delicious. Different methods are used to adorn the biryani. You can decorate it with dried raisins and nuts. The most preferred items for garnishing are Fried Inion, Mint leaves, and Sliced Lemon.

Things That Will Define the Taste of Sindhi Biryani Masala Recipe

As mouth-watering as Biryani is, it requires time and proper handling to have the best-ever taste. In this section, we have highlighted some of the factors that will decide how tasty Sindhi Biryani masala  recipe you will have.

For Biryani, whether simple or Sindhi, these two are the most preferred options. Choosing between them depends on your taste and cooking style.

Sella Rice is most effortless to handle as they don’t break too often and can soak for 2-3 hours. One thing about Sella rice is they are not as favorable as the Basmati rice.

Basmati rice, on the other hand, demands proper handling. You can’t soak them for hours, nor can you stir them too much. If not, they will break. Also, you can’t overcook the basmati rice. Yet, keeping the drawbacks aside, the taste basmati rice offers is second to none.

Spices have always been the core ingredient of Biryani. Whatever spice you add to the paste will impact the flavor. If you are a beginner and don’t know much about spices, try Lucky Masale biryani mix.

The best part about trying the recipe mix is the balanced proportion of the spices. The all-in-one pack contains freshly ground spices with no compromise on the quality.

Besides adding the recipe mix, other ingredients you can use to enhance the taste include:

Add pinches of grinned Nutmeg, Mace powder, and grinned Cardamom while finalizing the paste. About Vinegar or lemon juice, add a few drops while boiling the water. The sourness will prevent the rice from sticking together and to the bottom of the pan.

Don’t be like, let the Sindhi Chicken Biryani cook while I wrap up the side courses. After boiling the rice and preparing the paste, the maximum you can cook for is 20-25 minutes.

Overcooking the rice will harden them, and no one will eat it for sure. Also, the rice will stick to the bottom of the pan. Besides that, never boil the rice till thoroughly done; let it cook ¾ only.

It might sound simple, but how perfectly you set the layers matters. First, grease the pan with Oil or Ghee before spreading rice or meat. Now spread rice, then meat over it. Cover the layering with the top coat of rice. Use fresh Mint leaves, Fried Onion, and Lemon Juice for garnishing.

What to Serve With Mutton Sindhi Biryani?

Of course, you can’t serve the Biryani solely and ask the guests to enjoy the taste. Décor your dining table with side servings and double up the taste of the Biryani.

Are you thinking about what to serve? Try Green Raita and Salad. Raita for Biryani is the same as a cream for the cake. For Salad, add sliced Onion, Tomatoes, Beetroot, Cucumber, Cabbage, and Salad leaves.

Also, if some of you prefer extra spicy, have Tomato Chatni. Besides having Sindhi Chicken Biryani as the main course, you can also have Chicken Kerhai with Garlic Naan.

Can you add Potato to Mutton Sindhi Biryani?

Being an Asian, you better know how fascinated they all are when adding potatoes to Biryani. Although there is no combination of Potato with Biryani, all are still crazy about that.

If you don’t know, Potato is considered a special ingredient of Mutton Sindhi Biryani. Some eaters don’t take a single bite if there is no Potato in the Biryani. Crazy, right?

Whether or not you should add Potato to Sindhi Chicken Biryani depends on your taste. If you have kids in the family, prefer having Potato as they can’t eat spicily.

One thing to clear about adding Potato in Sindhi Biryani is it doesn’t ruin the taste but doubles up when served with green Raita and Salad. What you need to do is:

Take 2-3 three Potatoes and cut small cubes. Now add Yellow Food color to the water and boil the Potatoes till thoroughly done. Now add them to Biryani while layering the rice and paste.

Sindhi Biryani: Why is it so Mouth-Watering?

Look no further because today we are going to tell you about the exact reason why Sindhi Biryani is so mouth-watering, plus we will also give you the recipe of Sindhi Biryani so that you can cook it yourself at home.

Here’s why Sindhi Biryani tastes so good—it’s all about the secret recipe passed down from generations! While this recipe might be hard to come by nowadays, there are plenty of other tasty recipes that aren’t hard to get your hands on either. And guess what?

So let’s get started without wasting any more time!

It’s important to marinate meat for a long time to make sure that it takes on every ounce of flavor. The Sindhi biryani requires a piece of fresh mutton or lamb which has been sliced thinly, and then marinated overnight in a mixture of yoghurt, garam masala powder, turmeric powder, ginger paste, salt and black pepper. The fragrance that comes from these spices can make any mouth water – especially when cooked in ghee (clarified butter). You will also need to prepare basmati rice by washing it thoroughly and soaking it in water for half an hour before cooking.

When you are ready to cook, heat up a frying pan with some oil until smoking point. Add some cumin seeds and allow them to crackle, followed by chopped onions, green chillies and garlic cloves. Once they have turned golden brown add your marinated meat along with two cups of water into your frying pan. Cook on high heat until all liquid has evaporated from your pot leaving only oil behind; add more cumin seeds if you wish.

Sindhi Biryani can be served with raita (preferably onion and cucumber), achaar, salad or pappad and papadum or chips. Don’t forget to serve Sindhi biryani hot from its traditional earthen pot as that enhances its flavor even more.

However, if you are going for authentic taste then you should definitely try pairing it with ‘soda’ or ‘nimbu paani’. Sindhi biryani is best enjoyed when eaten fresh out of an earthen pot; however if you have leftovers then don’t worry because they taste great too! The leftovers should be refrigerated immediately after serving and should not be reheated in microwave ovens.

The Sindhi biryani’s taste can be attributed to its preparation. There are more than 10 different kinds of spices used in preparing biryani and each one adds its own special flavor to ensure that they all come together as a single delicious dish. Also, almost every house has their own way of making biryani and there is a competition between many families as to who makes it better! Even today, locals argue over which home actually makes the best Sindhi biryani.

As you take a bite of one piece after another, there are many mouth-watering benefits of Sindhi biryani; with every chunk that goes into your mouth, you can say goodbye to cholesterol and hello to a longer and healthier life. The caramelized sugar in Sindhi biryani melts in your mouth and fills it with hundreds of different flavours which are almost indescribable. No wonder everyone can’t stop devouring Sindhi biryani until their plates are clean! To know why Sindhi biryani tastes like heaven on earth, let’s take a look at what goes into making its recipe.

Lucky Masale would be your perfect partner whenever you want to make the spicy, flavored, and juicy Sindhi biryani. You should try Sindhi biryani when your friends come over or when you cook for your family, and they will never forget the taste on your hands.

If you want to get the best out of your meal, make sure you serve it with nuts, raita, and Salad. Also, don’t hassle around finding the ingredients and pulling your hair to have the best taste; try the Lucky Masale Sindhi Chicken Biryani Recipe mix.

Lastly, more recipes are around the corner. Stay tuned!

Potatoes, Yogurt, Basmati Rice, and Onion-Tomato paste make Sindhi Biryani different. Besides that, the preferred meat is bone instead of boneless.

What is unique about Sindhi biryani?

Sindhi Biryani is the exceptional cuisine of Sindhi culture. The combination of Basmati rice and Yogurt Paste is the taste of Sindh.

What is the difference between Sindhi and Bombay Biryani?

Sindhi Biryani is the combination of tendered meat with boiled Potato. While on the other hand, Bombay Biryani is spicier and juicier and doesn’t add Potatoes.

Can you serve Sindhi Biryani without Potatoes? 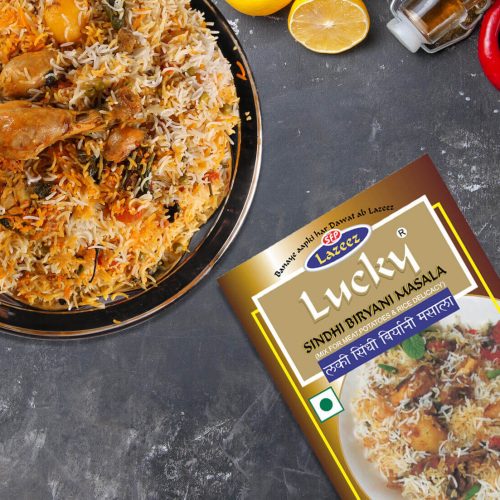