As the name Shami kabab comes, the thought of freshly fried kababs with mint chutney and raw onions crosses our mind. The name itself is enough for the gastronomes to be cheerful. Shami Kababs are quite a delicacy in Indian subcontinent. These kababs belongs to the rich Mughlai cuisine. The origin of Shami Kababs are not particularly known, but it is widely believed that this was the addition in Mughlai cuisine from the cooks who migrated from Syria also known as “Shaam” in Persian. They used to make kababs with mutton, split Bangal gram, and variety of spices and herbs in the royal Mughal kitchen.

Due to its flavor and texture Shami kababs are loved by people of all the age groups. Kids are in love with Shami kababs because it makes an awesome burger patty for them. As it’s a marvelous grab and go snack kids prefer it over other dishes. Shami kababs are usually made in bulk as it can easily be frozen for later use. Since the meat is cooked in Shami kababs before frying them, this process makes it easier for the longer storage purpose. Shami kababs are particularly made and are favorite of everyone during the Muslim Holy month of Ramadan and also on Eid. 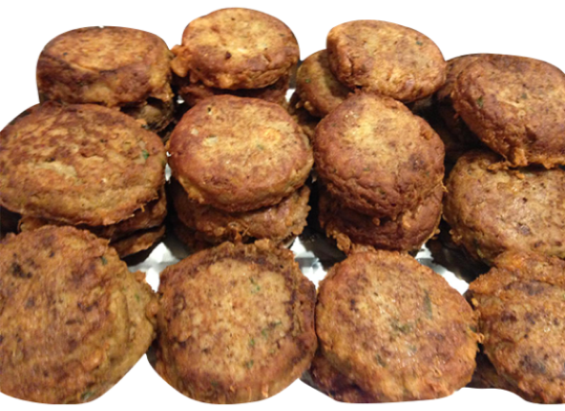 How are Shami Kababs made?

Shami Kababs are the amalgamation of meat, chana daal (split bengal gram), spices and herbs. The above mentioned ingredients are tenderized either by slow cooking or on pressure cooker, and then they are formed into patties. But first things first, and that is the use of meat. Shami kababs can be made with chicken and goat meat alike. They can be made by using the ground meat (Keema) and also can be made by using the boneless meat pieces. The type of meat will definitely play a part in determining the taste also.

Both chicken and mutton Shami kababs are very easy to make. The quantity in which the ingredients are used should be followed closely, as it ensures that the Shami kababs will come out good. The amount of water used in tenderizing the meat and daal is also very important or else the batter would be too loose to form the patties. But all these things should not deter one from attempting to make this delicacy. Mutton Shami kababs or chicken Shami kababs, one can never go wrong with this mouthwatering dish.

Here is the list of ingredients that are used in making mutton Shami kababs.

Now that we have the ingredients list, it comes to the choice of meat that one will use for the kababs. Chicken or Goat Keema (ground meat) can be used for making Shami kababs. If Shami kababs are of Keema then make sure to tell the butcher that he doesn’t add fat in the meat Keema. Because the fat in Keema will make the batter very slippery and patties won’t be formed easily. Dry (Rookha) Keema is used for the preparation of Shami kababs, as it blends well with the Chana daal, and also the batter comes out just perfect.

The step by step recipe here will make the cooking of Shami kababs a breeze.

Lucky Shami Kababs are ready to be served

Serve Shami Kababs with green chutney!! Lucky Shami Kabab Masala is an ideal blend of ground Indian spices which enhances the flavor of the dish. The right proportion of the spices used in the Lucky Shami Kabab masala powder makes cooking a lot easier. Since Lucky Masale uses only the finest quality of Indian spices, hence, the aroma and flavor are unmatched.

Here are some very useful tips which will help you in making the finest Mutton Shami kababs.

One can always freeze the kababs, and can fry it whenever needed. Since the batter is fully cooked before frying, it allows the Shami kababs to stay longer in the freezer.

The delicious mutton Shami kababs can be served as an appetizer and also in the main course with Biryani and Korma. Raw finely chopped onions and Mint chutney are two things which needs to be served with mutton Shami kababs to enhance the taste. The palatable Shami kababs are just too good to be ignored. Try this easy recipe and indulge your taste buds in the most delectable dish.